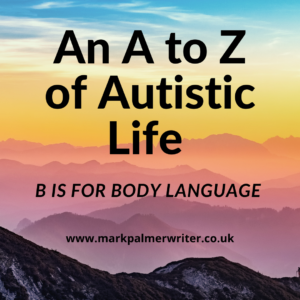 When I was at school, foreign languages were without a doubt my weakest subjects. When I scraped the lowest possible mark that was still a pass in French, I was happier with that than with much better grades in other subjects. Nowadays if I hear or read some French, I can generally pick up a few words and may be able to get the general theme of what is being talked about, but I have no chance of understanding any detail. Unless it is a menu, when for some reason I seem to know far more French than in any other area!

But it turns out that while I thought I understood everything being said when people spoke to me in English, I was very wrong. As an autistic person, body language and tone are a mystery to me. Which makes the 7-38-55 rule a bit of an issue. According to this theory, 7% of emotional communication is in the meaning of the words spoken, 38% in tone of voice and 55% in body language. So when someone speaks to me in English, I may be understanding even less than I do if they speak to me in French.

It took me an exceedingly long time to realise that I do not speak body language, either in understanding others or when communicating myself. It seems so obvious now, but I could never understand why I could say one thing and people would take a completely different meaning from it. Similarly, I would (and still do) listen to the words that people say and take the meaning of what they are saying from those, then be amazed when I was supposed to have inferred a completely different or even opposite meaning because of body language and tone signals that I had completely missed.

Most distressing of all are the times when even I can tell that something is not quite right, but I am unable to understand the body language and tone beyond that. The word “fine” is frequently a big clue – while it can be used to mean what it says, in my experience many people say “I’m fine” while meaning “I am anything but fine, but I want you to leave me alone” or possibly “I’m not fine and I need help but I need you to persuade me to accept it”.  Others seem to be able to determine almost telepathically why someone is upset, but unless someone tells me in words, I am unlikely to be able to figure it out. My biggest fear is that I have caused the distress, and I will then start to think back over my recent interactions with that person, completely over-analyse them to try and work out what I have done wrong and how to make it right, even though the cause of the problem may have been nothing to do with me at all.

Those that know me get to know over time that I need them to actually say what they mean and to listen to what I say, not how I am apparently saying it, for the lack of understanding of body language and tone works both ways – I am usually unaware of the messages I may be sending by my tone and posture, and they are highly unlikely to match what I am actually trying to say!

I know that there are times when being blunt and saying exactly what you mean can be unkind or unhelpful, and I know that I have and do cause some hurt by doing this. If I have hurt you in this way, I am truly sorry, and it was genuinely not my intention to do so.

But overall, would not a bit more clarity in communications be a good thing? It is interesting that many disagreements on online forums where everything is posted in writing seem to arise because people misinterpret what is written without the additional information they are used to receiving from tone and body language. Similarly, people may post something which they think is clearly sarcastic or ironic and may well be clearly so if spoken in person and find that others interpret it on face value, which causes all sorts of problems.

I find that I am much more comfortable doing as much of my communicating as possible through text based methods – emails, whatsapp, texting, live chats etc. It takes away the issue of body language and tone completely, as well as making it easier for me to refer back to what was said earlier and take a little longer to respond rather than rushing into saying something that is either silly or will cause problems. When you respond to an email, you can check it again before you press send, a gadget that has yet to be invented for our mouths as far as I am aware!

So please be aware that autistic people often struggle with body language and tone. Say exactly what you mean – we generally appreciate a bit of bluntness. Even if you are telling me that I have done something wrong, please just tell me, don’t hint – that will send my anxiety through the roof and still leave me clueless about what I have actually done. Once I know what the problem is, I can deal with it.

As with all things autistic, the way we communicate is not better or worse than other ways, it’s just different. You wouldn’t expect someone who spoke as little French as I do to understand complex messages in French – please think of body language and tone and as being similarly unknown and incomprehensible to me!