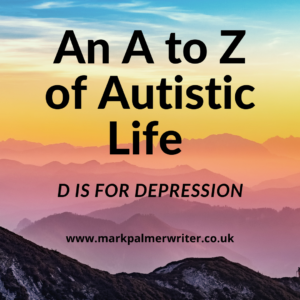 I knew that I had depression and anxiety many years before I realised that I was autistic. At university I was known as the guy that was usually sitting in the corner with my head in my hands. I have spent far too much of my life worrying about all kinds of things and have been conscious for a long time that I am a generally morose sort of person.

I was finally formally diagnosed with depression in my early forties after spending an entire weekend in tears for no particular reason and deciding that I really had to seek help from a doctor, however much I hated the idea having had plenty of bad experiences with medical professionals. After several appointments, I was prescribed anti-depressants which quite literally changed my life.

Depression is, I know, a completely separate condition from autism, and there are plenty of neurotypical people with depression and plenty of autistic people who do not have depression. Certainly some of my depression is a chemical condition which is why my medicines have an impact. But I do not think that my mental health issues and my autism are unconnected.

Research has shown that while around a quarter of the general population will face mental health issues at some time (and if you are doing so now, please get help, it’s not weak and it’s not your fault), around 80% of autistic people will have mental health problems. But the reasons for this enormous disparity are unclear.

There are several possible contributing factors, and the answer is likely to be a complex mix of elements unique to every person, like so many things to do with autism.

Being autistic in a neurotypical world is hard work mentally. So much of the world is not designed for autistic brains and we have to expend a great deal of mental capital to figure things out that apparently come naturally to others. Think of when you have learnt a complex new skill, such as driving or playing a musical instrument. As long as you are having to consciously think about each thing you do, you have limited success while also becoming very tired very quickly. The key to success is when it all becomes natural and instinctive without having to go through the conscious part of your brain.

Autistic people find it very hard or impossible to do many of the things that are part of everyday life in an unconscious way like this. If we are having a conversation with somebody, we do not automatically take messages from their tone and body language, we have to work hard to maintain eye-contact as we keep being told how important it is, we have to consider whether the person we are speaking to means exactly what the words they are saying mean or something else entirely, we have to consider whether what we say is going to be viewed as excessively blunt even though we are just saying exactly what we mean, which makes perfect sense to us. All of this happens in conscious thought requiring deliberate effort. Now extend that to many other activities every day and you can see how mentally exhausting it becomes. If you work your body too hard, eventually it breaks down. The brain is no different.

One way that some of us try to deal with these daily challenges of living in a world not designed for how we think is to mask – instead of being ourselves, we spend much or all of every day pretending to be somebody else who will better fit in with a neurotypical world. That too is exhausting – ask a professional actor how much effort it takes to play a part convincingly, even when you have your lines provided.

Then there is the fact that so much of the world seems so odd to us. We feel very much like strangers in a strange land. What is this obsession with small talk? Why are meetings which seem to usually achieve little except take up a huge amount of lots of people’s time seen as the solution to every problem instead of taking direct action?

Many of us are hypersensitive in one or more senses. For me it is noise, and particularly many voices at once in an enclosed space. If I can hear a voice, my brain tries to work out what is being said, even if I can hear 20 voices at once. It literally does my head in and usually leads me to rush from the room, though of course others see no problem at all. Other autistic people struggle with bright lights, heavily patterned surfaces, smells, textures and so on. Processing all these stimuli that others are able to subconsciously filter out uses yet more mental energy.

So yes, lots of autistic people have mental health issues of various kinds. It’s not because there is anything wrong with us, it is the sheer effort of coping in a world designed for others. We will keep trying, but it is hard!