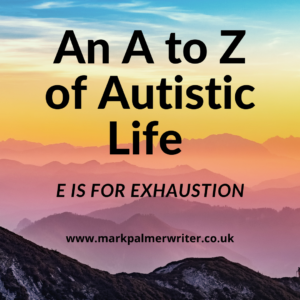 All life is tiring. I understand that – I do not know anyone who isn’t tired most of the time, especially during this pandemic. But being autistic seems to come with its own brand of exhaustion, and its own way of dealing with it whether you like it or not.

In my experience, mental and emotional exhaustion are much harder to deal with than physical exhaustion. On the all too rare occasions when I exercise vigorously or do a lot of physical work, I get very tired, but in a way that feels good. My body aches but my mind feels renewed and invigorated by the exercise. The tiredness in my body is relatively easy to tackle with a period of rest and a good night’s sleep or two.

But mental and emotional exhaustion – and I think that there is a strong overlap between the two – are a different matter altogether, for me at least. This kind of exhaustion feels deep rooted, and a night’s sleep or two will often leave it almost untouched, or even make it worse if I dream. It is draining and debilitating, making even the most basic tasks a struggle. The only way out that I have found is time and peace, preferably combined.

I think there are several causes for my tiredness. The first is the need to think and probably overthink almost everything I do or say. I often think of living as an autistic person in a neurotypical world as like learning to drive a car. I remember that after most of my driving lessons, at least at first, I would feel absolutely drained. I knew why, too. I had to focus on absolutely every movement and decision, sometimes using all four limbs to do different things at the same time while also making sure that I was looking in the right directions and thinking what to do next. Of course, driving does not stay that tiring. As you learn, more and more of the tasks involved become automatic and engrained in muscle and mental memory, so that your focus can be almost entirely on the things that you are not used to, such as erratic driving by others around you or finding your way in a strange place.

As an autistic person, I still feel like many days I am at the very beginning of learning to live in a neurotypical world. Nothing that is expected comes naturally. If I say what I want to say or do what I want to do without actively thinking about the expectations of the world, I quickly come to grief. But behaving and speaking like a neurotypical person has never come naturally to me and never will. I spend most of my life (when not at home) acting out a part, masking my autism, and having to consciously think through almost everything. It is no wonder I am tired.

Secondly, I just do not sleep well at all and have not done so for many years. I wake frequently in the night, find it hard to quieten my thoughts back down to fall back asleep, and when I do sleep, I often have stressful dreams which leave me more tired than when I went to bed. It is true that I sometimes have some great ideas lying awake at 2am, but they would be just as welcome at 2pm!

Part of this may be down to my medication. I have been on antidepressants for many years and they have transformed my life. But coupled with my autistic brain that does not know when to stop, sleep is a real challenge.

And then there is the fighting. Not actual punch ups, but constantly having to stand up for my own diversity and my autistic instinct to fight hard against almost every injustice that I come across. A hatred of injustice is a common trait among autistic people – I cannot just simply keep my head down and ignore it when I see wrong being done. I cannot just let things go and wrongdoing continue unchallenged. I often have little impact other than to get myself into trouble of one sort or another, especially at work, for challenge is still broadly unwelcome in most places despite bold statements to the contrary from leaders all over the place. But we all must live with ourselves. I am not saying that others should all fight every little battle as I feel obliged to do. We are all different and entitled to make our own choices (though it is frustrating when yet again I have challenged something in a group setting on my own and am told by others who were there afterwards that many of them agreed with me though they said nothing at the time!). But I simply cannot let injustice go unchallenged, most of the time at least.

Most of these things I would not change – they are part of what makes me me, though I would not turn down a few good night’s sleep! But being autistic in a neurotypical world is exhausting, and I suspect that that is not going